Photo by Filip Šablatura on Unsplash

Danielle “Elle” Wittimer is a Stargunner, a member of the Starfield fandom. When she finds out that Darien Freeman is cast for the reboot later that year, Elle is less than happy. However, upon finding out that the grand prize for the cosplay contest at Excelsicon is a plane ticket to Los Angeles, Elle sees this as her one time opportunity to leave her oppressive stepmother and her stepsisters to freedom. And so, Elle embarks on a new adventure making her first cosplay, entering her first cosplay contest, and making a new friend in the process.

Darien Freeman has the role of his dreams. Ever since he was a kid he’s wanted to be Prince Carmindor from Starfield. But with the crazy fangirls, the suspicious photo leaks, the grumbles of die-hard Stargunners, and a haughty co-star Darien has found the experience anything but a dream. The only good thing he’s found so far is Elle. What began as contacting the wrong number to try and weasel out of a gig has turned into an endearing text-based relationship–a daily escape for Darien’s bleak reality. Excelsicon is coming up and Darien is less than pleased about his appearance, but is excited at the notion that Elle might be there. Will they meet up and how will she react upon finding out that he’s Darien Freeman?

I didn’t exactly know what to expect from this novel, but I’m glad of what I found. Geekerella turned out to be a cute, quirky contemporary romance. I hail from the world of fandoms, so a lot of the little things that were touched upon really brought me back to my junior and senior year of high school. I remember going onto tumblr and gushing about characters, ships, and fan theories. I remember going into an enormous skype group chat and talking for hours. These were things that I lived for and it’s really obvious that Ashley Poston was part of this community as well. I felt like sometimes the references and the shout outs were a bit much and actually took away from the story, but it was still fun.

Ashley Poston also did a good job at making the reader understand how truly alone Darien and Elle felt in their situations. Darien was an overnight sensation on Seaside Cove (an OC-esque teen drama) and bolstering his career with a major blockbuster reboot like Starfield only furthered his fame, but while it may have helped his career–Darien couldn’t help but feel alone. He’s a kid and just wants to be a normal guy, but being in the spotlight shows Darien that he can’t control what people think and say. Elle on the other hand is living the Cinderella life. I’m ashamed to say that I didn’t pick up that this was a Cinderella retelling until the references were laid on a bit thick. The magic pumpkin is a vegan foodtruck, Elle is our protagonist’s name, she has two twins, etc. etc. So, it’s safe to assume why Elle feels incredibly alone. As per the usual Cinderella tale, she’s mistreated by her stepmother and stepsister. Starfield is really all that’s left of her mother and her father and her stepmother does everything she can to erase that part of Elle’s life. Elle’s character was easy to sympathize with and I really felt for her on certain occasions.

The relationship that was built between Darien and Elle was really cute. A lot of the time I couldn’t help but smile during their interactions through text and it was really obvious that they were so into each other. I like that their relationship was challenged in the narrative. As the reader you think, oh this is a no brainer they’re just talking. They click so easily that you forget that for the most part, they are essentially strangers to each other. They’ve never seen each other or met in real life. It was a really great way to show how the new technological age can create and effect relationships, especially for teens. Again, I was and am still friends with a lot of people online. People I’ve never met before, but have a profound connection with.

This novel was a ton of fun! It’s an easy and quick read because of the way it’s written. Both Elle and Darien are lovable and easy to root for… Well Darien would probably get on my nerves a little bit, but in a little brother kind of way. The story is fluffy with the happy ever after that I love so much. I definitely recommend it for those geeky readers who just want a pair of geeks getting together.

Many thanks to Quirk Books for providing me with an eARC copy of this book for review! 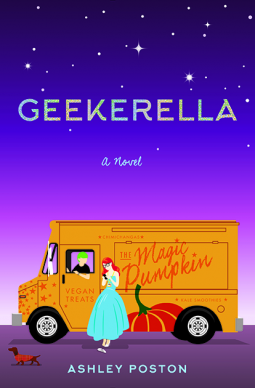 Other than being a theatre arts and a costume design major, I enjoy reading, writing, watching anime, and occasionally playing video games. I also have fun making cosplaying and attending cons. I have a cat named Luna that love/hates me and a new kitty named Gilda. View all posts by Alexa

On the Last Time…

What is it you’re looking for?