Hey all. I haven’t been on here in months and if you’ve been following on my Twitter, you might know that I’ve decided to stop book blogging. The reason is entirely personal and is because I just don’t really find it fun anymore. I think I’ll still write reviews, but I’m not going to write them out like I wrote out my book reviews.

That being said, I still want to blog, but just in a different way. I want to make my blog a lifestyle/art blog and would like to rebrand. What does this mean? It means that I probably won’t be posting anything on this blog any longer. While I really like some of the posts I’ve made, I would like to start fresh.

I really feel bad considering that a few ppl have followed me blog only recently. If you’d like to follow a lifestyle/art blog, please head over to my Twitter @ahnyoo_ for updates on when I’ll be launching that.

This blog won’t be deleted, but it’ll be inactive. As for giveaways and such, I’ll still be completing them. I’m so so sorry for not following through with it. My life took a crazy turn and I just wasn’t able to keep up with it, but I should’ve been transparent and posted something about it. If you’re waiting for a package from me or anything, please know I’m trying to get that to you ASAP.

Thank you everyone for following me, liking my posts, sharing, and commenting. It was definitely fun and interesting. It’s something that I really enjoyed doing for a time and I hope you join me on my next adventure.

Photo by Filip Šablatura on Unsplash

END_OF_DOCUMENT_TOKEN_TO_BE_REPLACED

Photo by Octavian Rosca on Unsplash

END_OF_DOCUMENT_TOKEN_TO_BE_REPLACED

Director’s Notes is a series of posts to log my experience in directing my first major One Act at my college. I’ll be going through the beginning weeks all the way up until closing. I hope you enjoy these posts and my journey as well.

END_OF_DOCUMENT_TOKEN_TO_BE_REPLACED

Photo by Martino Pietropoli on Unsplash

END_OF_DOCUMENT_TOKEN_TO_BE_REPLACED

Photo by Felix Russell-Saw on Unsplash

END_OF_DOCUMENT_TOKEN_TO_BE_REPLACED

Since this tends to happen with every semester that comes and goes, I want to let everyone know that my blog is probably going to be sparse. I’m going to try my best to keep it up and at least have reviews going, but considering what my schedule is looking like this fall–this might not happen. If anything I’ll be active on my twitter @ahnyoo_ and if I do read, I’ll probably be on GoodReads.

Thank you to everyone who’s since joined me on this journey and I hope I don’t disappoint, but if I disappear, do know that school is the reason why. As much as I love blogging, I can’t let it get in the way of my education.

Much love, and break a leg to all those starting school soon as well!

Photo by sean Kong on Unsplash

END_OF_DOCUMENT_TOKEN_TO_BE_REPLACED

If you guys haven’t been on Twitter this week you may or may not have been aware of what just happened. On Thursday morning a new New York Time’s Bestseller’s list was sent out with a very shocking testament. Angie Thomas’ The Hate U Give was knocked down from the #1 Bestseller list. An amazing feat considering that she’s held that spot for most, if not all, the twenty-five weeks she has been on this list. So what’s the book that did it? Handbook for Mortals by Lani Sarem.

If you haven’t heard about it, don’t worry! Neither has anyone else in the YA community and that’s why I’m writing this post.

END_OF_DOCUMENT_TOKEN_TO_BE_REPLACED

For how much I talk about anime and manga, I’m surprised I haven’t written a post about graphic novels or manga yet. At least one that discusses reviewing them. However, Netgalley has been generous and I’ve been given a few graphic novels to look at and review. Before we begin, I want to thank Diamond Book Distributors, Vault Comics, and Benitez Productions for giving me a review copy of these graphic novels. 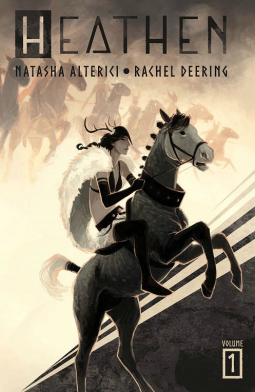 Heathen is a graphic novel that will intrigue those who love Norse mythology. It centers around a girl Aydis, a young Viking, who has taken it upon herself to prove to the world that she is stronger and braver than any man by rescuing an exiled Valkyrie after she’s been outcast by her village.

The art style of this graphic novel is really unique. Even though I read it in a digital format, there were a lot of traditional techniques used in the comic and I really enjoyed it. The color palette can be a bit monochrome, but I think it fits the setting and I really enjoy the palette generally.

On top of that, Aydis is gay! Which is something I did not expect and it was a wonderful surprise. We get a female-led warrior story who’s totally into girls? Uh, count me in! In the four chapters we get in the first volume, we get a lot of topics touched upon and I think it does a great job of marrying these topics with the overall story. It starts off with really great exposition and then ends with a really strong cliff hanger. I can’t wait to see where this story goes.

Author: Natasha Alterici
Pages: 108
Published: August 8, 2017* by Diamond Book Distributors and Vault Comics
*The pub date on Goodreads is different, but I think this might be a volume version of the comics rather than the singular chapters as comics themselves.
Amazon | B&N | The Book Depository

On the Last Time…

What is it you’re looking for?